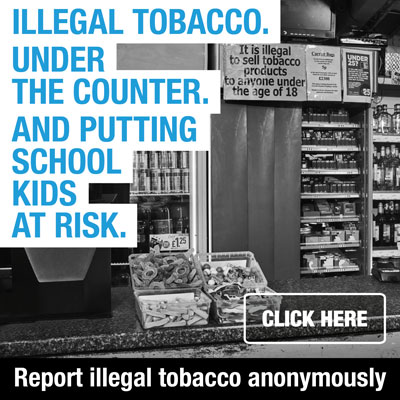 “It is illegal to sell tobacco products to anyone under the age of 18.”

Illegal tobacco is a problem that enables local children to smoke, brings crime into communities and undermines local shops.  As a retailer, if you’re angry about it, you are right to be annoyed – and you can help.

While most shops do not sell illegal tobacco, and would not dream of selling to children, figures do show shops have become a source for illegal tobacco sales, with a small minority of traders prepared to break the law.

What is illegal tobacco?

Nationally the illegal tobacco market has halved over the past decade, but it is still a problem in some areas. While all tobacco kills, illicit is a problem because:

What is the law?

Tobacco products are subject to traceability regulations and tobacco packaging must have certain security features. All tobacco retailers must have an economic operator ID to sell tobacco – see www.gov.uk/guidance/selling-and-storing-tobacco-products.

What are the penalties for selling illegal tobacco?

As well as potentially losing their alcohol licence or lottery terminal, shops can face:

Shops suspected of selling illegal tobacco can be subject to raids by HMRC or trading standards with sniffer dogs and if caught, shamed in the local newspaper

How can I keep my business safe?

By actively supporting the Keep It Out campaign you will help to protect your own business and the business of fellow legitimate retailers.  There are a number of ways you can do this:

Back to top
This campaign is being managed by Fresh with funding support from Local Authorities.
© Fresh 2021. All rights reserved